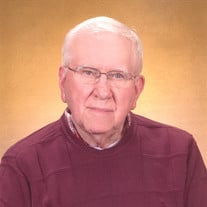 Harold D. Hileman, 91, of Akron, Indiana passed at 6:40 pm, Sunday, Oct. 27, 2019 at Kosciusko Community Hospital of Warsaw, Indiana. He was born on May 17, 1928 to Loyd N. and Mary Ruth (Smith) Hileman. He married on July 14, 1951 in Akron, Indiana to Ruth Anna Brookins, who preceded on July 19, 2002. Harold had been a mechanic. He worked at various places through the years, which included, Akron Implement (Stucker’s), Louderback Chevrolet, Nationwide Insurance, Akron News, and finally retiring from Zimmer Orthopedics in 1991. He was a 1946 graduate of Akron High School. He served his country in the U.S. Army from the years of 1951 to 1953 during the Korean War. He had been a longtime member of the Akron United Methodist Church. He had been a member of Good Sam, Kosko County Campers, and Jayco Owners Club. He had a very sharp mind for math and engineering and was known for building many things. He built his own camper and had amazing skill for making models. He made models of fire trucks, excavators, semis, and airplanes just to name a few. He always enjoyed racing, drawing, organ music, camping, and tractor pulls. Survivors and place of residence: Children - Charles and wife Connie Hileman Christine Sue and husband Dan Bixler Harold “Randy” and wife Lea Hileman Dale and wife Debbie Hileman 13 Grandchildren 25 Great Grandchildren Preceded in Death By: Parents – Loyd and Mary Ruth Hileman Wife - Ruth Anna Hileman Brother – Lloyd S. Hileman Daughter-in-law – Karen Hileman The funeral service will take place at 10:30 am, Thursday, Oct. 31, 2019 at Hartzler Funeral Home 305 West Rochester Street Akron, Indiana with Pastor David Eaton officiating. Burial will be in the Akron Cemetery, Akron, Indiana with graveside military rites being performed by the Fulton County Honor Guard. Visitation hours will be from 4 pm to 7 pm, Wednesday, Oct. 30, 2019 at Hartzler Funeral Home, Akron, Indiana. Donations can be made in his memory to the Akron United Methodist Church.

The family of Harold D. Hileman created this Life Tributes page to make it easy to share your memories.

Send flowers to the Hileman family.