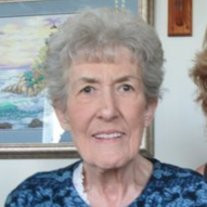 Geraldine P. 'Gerry' Denning, 75, Akron, formerly of Chicago, Ill., passed away surrounded by her loving family and companion at 1:15 a.m. Monday, Aug. 19, 2013, at her residence. She was born Nov. 24, 1937, in Chicago, Ill., to parents John and Gladys (Wiggins) Speller. Gerry worked at US Steel as a secretary and at Marshall Field's in Chicago. She was a graduate of Bowen High School in 1955. Gerry and her companion Harold moved to Akron over 15 years ago. She was a member of the Red Hat Society, Moose Lodge of Rochester, and the Las Donas Club of Akron. Gerry was a collector of tea pots and always enjoyed her family, friends and traveling. Survivors include her companion, Harold Johnson, Akron; two daughters, Annette Blackwell, Gary, and Janet Toman, Hainesville, Ill.; one son, Mark and wife Nicole Denning, Elmhurst, Ill.; eight grandchildren, six great-grandchildren; twin brother, James and wife Dolores Speller, Springfield, Ill.; and sister, Ann and husband Leonard Derkowski, Pittsburg, Calif. She was preceded in death by an infant sister, Mary. Funeral service is at 7 p.m. today at Hartzler Funeral Home, Akron, with Pastor Jason See officiating. Visitation is 5-7 p.m. today at the funeral home. Additional visitation is 4-8 p.m. Friday, Aug. 23, 2013, at Elmwood Chapel, 11200 South Ewing Ave., Chicago, Ill. Burial will be at a later date in Springfield, Ill. Memorial contributions may be made to Gentiva Hospice, Rochester.

The family of Geraldine P. Denning created this Life Tributes page to make it easy to share your memories.

Send flowers to the Denning family.