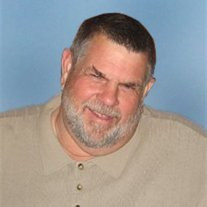 Gary 'Heav' Adams, 59, Akron, passed away at 11:20 a.m. Friday, Aug. 30, 2013, at his residence, after being in failing health for six weeks. He was born May 14, 1954, in Rochester, to parents Jack Jr. and Aleene (Lowry) Adams. On Sept. 22, 1984, in Akron, he married Jennifer J. Bickel and she survives. Gary was a road foreman for Kosciusko County Highway Department, where he had worked for 28 years. He was a 1973 graduate of Mentone High School. He loved to mow the yard and enjoyed NHRA drag racing, as well as going to auctions. He was known to be a friend to everyone. Survivors include his wife, Jeni Adams, Akron; daughter, Jamie Adams, Akron; son, Ryan and wife Chaitra Jewell Adams, Akron; sister, Diane and husband Rick Landis, Macy; mother- and father-in-law, Jim and Shirley Bickel, Akron; and several aunts, uncles, nieces and nephews. He was preceded in death by his parents, Jack and Aleene (Lowry) Adams; and brother, Dennis R. Adams, who passed Aug. 17, 2007. Funeral service is at 10:30 a.m. Wednesday, Sept. 4, 2013, at Hartzler Funeral Home, Akron, with Pastor Terry Canfield officiating. Visitation is 2-8 p.m. Tuesday, Sept. 3, 2013 at the funeral home. Burial will be in Akron Cemetery, Akron. Memorial contributions may be made to Gentiva Hospice of Fulton County.

The family of Gary L. Adams created this Life Tributes page to make it easy to share your memories.

Send flowers to the Adams family.