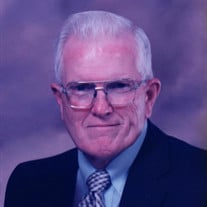 Forst Blue Dunnuck, 87, of rural Mentone, Indiana passed at 2:37 pm, Saturday, Sept. 5, 2020 at Grace Village Retirement Community of Winona Lake, Indiana.   Forst was born on Oct. 31, 1932 in Warsaw, Indiana to the late Maurice E. and Cathern B. (Blue) Dunnuck.  He married on Nov. 25, 1953 in Etna Green, Indiana to Louise I. Kelly, she survives.   Forst was a graduate of Mentone High School in 1950.  He then graduated from Manchester College in 1954, Indiana University in 1960, and lastly Purdue University West Lafayette in 1963 with his Master’s Degree in Counseling.   He started his teaching career as a teacher and coach for Atwood School from 1954-1959.  He then taught at Mentone High School from 1959-1962.  After Mentone, he became Guidance Counselor and later Principal for Akron High School during the years of 1963-1974.  Forst then became the first Principal of Tippecanoe Valley High School in 1974.  He retired from TVHS in 1977 and became a full time farmer.   He retired from farming in 1995.  He then became an independent insurance agent for many years.  He served as President of the Indiana Veal Producers Association.  He had been a member of Gideons International since 1978. He also served as Sexton and board member of the Harrison Center (Wooden) Cemetery since 1961. He had been, in years past, a Sunday School Teacher and Deacon of the Harrison Center Church and mostly recently he had attended Bourbon Bible Church. He always enjoyed sports, especially the White Sox.   Survivors include his wife, Louise Dunnuck; daughters, Joyce and husband Alan Welch, Barbara and husband Dennis Croy, Sandi and husband Jon Schaeffer; sons, Darrell and wife Kathleen Dunnuck, Stephen and wife Becky Dunnuck, and Jay and wife Julianne Dunnuck; grandchildren, Lauren (Andrew), Michael, Anna Grace , Cathern, Rachael (Bryan), Jonathan (Stephanie), Paul, Syndey (Wyatt), Katie (Ryan), Grant, Abigayle, Brenton, and Keira; great granddaughters, Eleanor and Kyla. He was preceded in death by his parents; a son, Thomas E. Dunnuck; grandsons, Samuel and Gabriel; sisters, infant Marilyn Dunnuck and Elaine Fugate Hill; and a brother Kenneth Dunnuck. The funeral service will be at 1:00 pm, Friday, Sept. 11, 2020 at Bourbon Bible Church 2002 12th Road Bourbon, Indiana with Pastor Larry Goss officiating. The interment will follow the service in the Harrison Center (Wooden) Cemetery, Etna Green, Indiana. Visitation hours will be 11:00 am to 1:00 pm, Friday, Sept. 11, 2020 at Bourbon Bible Church, Bourbon, Indiana.  Masks will be required for all in attendance. For those unable to attend you can express your sympathies by sending a card to 1261 S. 900 W. Mentone, IN 46539. Donations can be made in Forst’s memory to Gideons International.

The family of Forst B. Dunnuck created this Life Tributes page to make it easy to share your memories.

Send flowers to the Dunnuck family.