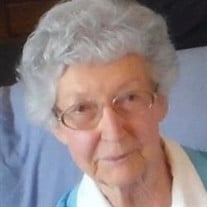 Esther E. Nelson, 97, of Mentone, IN, died at 2:25 P.M., Tuesday, April 23, 2019, at Grace Village Retirement Community, Winona Lake, IN. She was born on November 12, 1921, in Kosciusko County, (Burket) Indiana, to Elmer and Jessie Sanders Duglay. On October 8, 1938 at Warsaw, Indiana she married Frank A. Nelson, who preceded February 17, 1971. She had worked as a teacher’s aide at the Burket School and had been the Seward Township Deputy Assessor and had worked as a bookkeeper for Oxy Chemical in Burket. She attended Burket School. Esther was a member of Redeemer Lutheran Church of Warsaw for many years. She enjoyed music and knitting and played the piano. Reading was a passion of hers as well as visiting with her friends. She was a patron of the Bell Memorial Library and enjoyed going to the Nutrition Site at Mentone. Survivors include one Daughter – Anne Utter of Winona Lake, Indiana 4 Grandchildren – Leigh Utter Lynn (Husband Glenn) Novitski Brian Nelson (wife-Stephanie) Sara Nelson 8 Great Grandchildren 2 Great Great Grandchildren She was preceded in death by her parents and her husband, a son Robert Nelson, 2 brothers- Robert and Victor Duglay, and a sister Elizabeth Bouse. A Graveside Service will be held at 11:00 a.m., Monday, April 29, 2019, at Mentone Cemetery, Mentone, Indiana. Pastor Michael Mueller will officiate. Burial will take place at the Mentone Cemetery, Mentone, Indiana. Friends may visit from 4-6 PM, Sunday, April 28, 2019, at King Memorial Home, Mentone, Indiana. Memorial Contributions can be made to the Bell Memorial Library. Share a Memory or send an Online Condolence at: www.hartzlerfuneralservices.com

The family of Esther Nelson created this Life Tributes page to make it easy to share your memories.

Send flowers to the Nelson family.