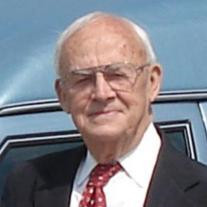 Eldon Stukey Horn, 94, Warsaw and formerly of Mentone, died at 6:45 a.m. Friday, Nov. 2, 2012 at Kosciusko Community Hospital, Warsaw. He was born Feb. 22, 1918, in Tippecanoe, to parents Isaac and Vida Stukey Horn. On Sept. 22, 1940 he married Mary L. Cumberland in Etna Green. She passed away Feb. 2, 2006. Eldon had been a poultry farmer for 33 years in the Mentone and Palestine areas. After retiring from farming, he then worked at Zimmer Orthopedics in Warsaw for 10 years. He also worked for 22 years at King Memorial Home in Mentone, helping serve the families of the community. He was a 1936 graduate of Mentone High School. Eldon was a member of the Mentone United Methodist Church. He was an active member of the Mentone Lions since 1963. He served 15 years on the board of the Potawatomi Wildlife Park, where he was a charter member. Eldon was very active at the Helping Hands food bank for the past five years. He had a passion for boys and girls basketball. He loved to watch his grandchildren as well as many others play games. He enjoyed spending time with his family. Survivors include two daughters, Karen Horn and partner Marcia Shreve, Katy, Texas, and Cheryl and husband Jerry Ryman, Warsaw; two granddaughters, Angela and husband Randy Heinsman, Warsaw, and Nicole (Ryman) and husband Matt Dick, Warsaw; and five great-grandchildren, Madison, Kensington, Jeremy, Victoria, and Justin. He was preceded in death by three sisters, Esther Sarber, Gaynell Crieghton, and Geneva Beeson; and three brothers, Wilson, Scott, and Owen Horn. Funeral service is 10:30 a.m. Monday, Nov. 5, 2012 at King Memorial Home, Mentone, with Reverend Amber Karkosky-Litten officiating. Visitation is 2-6 p.m. Sunday, Nov. 4, 2012 at the funeral home. Burial will take place in Oakwood Cemetery, Warsaw. Memorial contributions may be made to the Mentone United Methodist Church Endowment Fund.

The family of Eldon Stukey Horn created this Life Tributes page to make it easy to share your memories.

Eldon Stukey Horn, 94, Warsaw and formerly of Mentone, died at...

Send flowers to the Horn family.