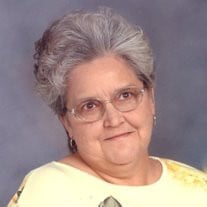 Edna Carol Presley 65, of Palestine. Died at 4:10 am, Sunday, Sept. 15, 2013 in her residence. After a long fight with cancer Edna went home to be with her mother and Lord and Savior She was born in Phelps, KY to Frank J Layne and Gladys M Blankenship Layne on November 6, 1947. On February 7, 1963 she married the love of her life, Roy F. Presley, who survives She and her family moved to Indiana from Matewon, W. VA, in 1967 and then to Palestine in 1973 where the Presley’s have called home for the last 40 years. She was a very active member of the Burket United Methodist. She delighted in and loved her church family dearly. From teaching many years of Sunday school and VBS to the different classes and events she attended with her fellow brothers and sisters. She was the Office Manager of Bre-Mat Trucking for 29 (94) years. A company that was formed, as many small business are, with many an hour spent at her kitchen table by herself, her husband Roy, her son-in-law Matt, and daughter Brenda and with a semi name Turtle. Before Bre-Mat she also worked at Zimmer, R.R. Donnelly, and Jomac Gloves. She also had a passion for driving her car; she loved keeping the road hot with an activity from church trips to quilting/fabric runs with her daughter Royetta, to getting Roy out of the house for the occasional vacation. She would tell you her life was blessed with the love of her God, her three girls, her grandchildren, and most of all she got to share in the greatest love of all time with her husband Roy. When they would hit the dance floor, most times, all the other couples would just stand back to give them room. They were able to celebrate 50 years together before the cancer started working on her for the second time. She will always remember and will never be forgotten by her husband Roy F. Presley , Mentone; three daughters: Carol (and spouse Mike) Ousley, Claypool; Royetta (and spouse Tommy) Good, Mentone; and Brenda Shepherd, Mentone. Seven Grandchildren: Jonathan ( and spouse Michelle) Dotson, Kokomo; Timothy (and spouse Martha) Dotson, Warsaw; Linzi Ousley, Muncie; Holly Ousley, Akron; Kevin Good, Living at home; Amanda Shepherd, and Dalton Baldridge, both living at home; and 6 Great Grandchildren Tyler, Brieley, Michael, Timothy, Devlin, and Hadley. Her father Frank J. Layne, Burket; a brother Freelin J. Layne, Claypool; a sister Lechia A. (and spouse Joe) Manns, Claypool; many aunts, uncles, nieces and nephews. She was preceded in death by her mother Gladys M. Layne. Services will be at 10:30 am, Wednesday, Sept. 18, 2013 at King Memorial Home 101 North Tucker Street Mentone, Indiana with Pastor Gary Loy officiating. Visitation will be from 5 pm, to 8 pm Tuesday, Sept. 17, 2013 at King Memorial Home Mentone, Indiana Burial will be following the funeral at Palestine Cemetery Palestine, Indiana Memorial Donations can be made to the Presley Family

Edna Carol Presley 65, of Palestine. Died at 4:10 am, Sunday, Sept. 15, 2013 in her residence. After a long fight with cancer Edna went home to be with her mother and Lord and Savior She was born in Phelps, KY to Frank J Layne and Gladys M... View Obituary & Service Information

The family of Edna Carol Presley created this Life Tributes page to make it easy to share your memories.

Send flowers to the Presley family.