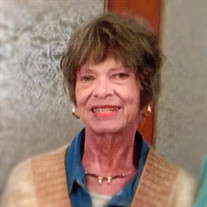 Doris Francke Schipper, of rural Roann, Indiana passed at 1:37 am, Saturday, March 23, 2019 at her residence. She was born on October 14th to Carolyn (Erni) and Francis W. Francke in Jeffersonville, Indiana. In October of 1975, she married... View Obituary & Service Information

The family of Doris Schipper created this Life Tributes page to make it easy to share your memories.

Send flowers to the Schipper family.