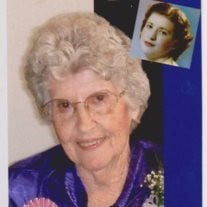 Doris Elizabeth Newton, age 94, died at 9:15pm at Hickory Creek, Rochester, Indiana. Doris was born Aug. 2, 1919, in Kosciusko County to William and Bessie (Shirey) Matthews. On Nov. 30, 1940, she married Frank Newton who passed away on Feb. 28, 2001. They have three daughters: Frances (Carl) Griner, Lakeland, FL; Janie (Dick) Teel, Mentone; Joanna (Garry deceased) Weidner, Lakeville. They had one son, the late Eddie Newton (spouse Wally Vandermark, deceased) Doris has 11 grandchildren. Frances's children: John (Despina)Lawrence,Tom Lawrence, Jennifer (Greg) Baisden, Lakeland, Florida, Janie's children: Debbie (DeWayne) Doty, Winamac; Brenda (Todd, deceased) Miller, Winona Lake; Heather Teel, Kokomo; Scott Teel, deceased. Joanna's children: Jeff (Kelly)Weidner, Granger; Chris Weidner, San Antonio, Texas Eddie's children: Linda (Rick) England, Mentone; Marie (Brett) Miner, Broomfield, Colorado. Doris has 22 great-grandchildren and 11 great-great grandchildren. She has many nieces and nephews. Doris was preceded in death by two older brothers: George and John Matthews. Doris was a homemaker and lived her 60 years of married life on a farm in Fulton county. During her life, she has been an avid reader, reading two daily newspapers as well as reading many books and magazines. She enjoyed watching TV. She was known in the area for her outstanding flower and vegetable gardens. She always had a cheerful attitude about life. She is a member of the Akron Church of God and enjoyed many church activities with her friends until she was no longer able to drive to church. Doris was the kind of gramma that you read about in books or see in movies. The kind of gramma that would be in the kitchen, always in a dress, with a matching apron, with something good cooking. If she wasn't in the kitchen, she could be found in her garden, a garden that she nurtured and took pride in. We had the kind of gramma that truly was concerned in every aspect of our lives, a humble woman who truly treated her husband like a king. A woman that put God and family first, never forgetting a birthday and always preparing a feast with everything made from scratch for the family gatherings.Without a doubt, her grandchildren (and children) loved her and knew that she loved them. The time has come for Gramma Doris to be with our Lord, she will be missed, but her memory and dedication to God and family will never be forgotten. Services are at 10:30 am Friday, Jan. 17, 2014 at King Memorial Home, Mentone, with Pastor Terry Canfield officiating. Burial is at Sycamore Cemetery, Mentone. Friends may call from 4-8 p.m. Thursday, Jan. 16, 2014 at the funeral home.

The family of Doris Newton created this Life Tributes page to make it easy to share your memories.

Send flowers to the Newton family.