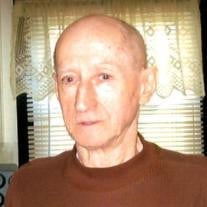 Donald K. "Pete" Peterson, 78, Yale St., Mentone, died at 2:55 p.m. Sunday, June 3, 2012, at Kosciusko Community Hospital of Warsaw. Donald was born on Nov. 26, 1933, in Warsaw to Charles "Byron" and Virginia (Woodling) Peterson. Donald was a lifetime area resident of Mentone. He worked at Midwest Spring of Mentone where he received a 60-year plaque. He had just retired in April. He was a member of the Moose Lodge and the VFW both of Rochester. He was a 1952 graduate of Mentone High School and a U.S. Navy Veteran. Survivors include two daughters, Ledonna and husband Jerry Dickson, Rogersville, Ala., and Sally Kitson, Warsaw; a son, Donald E. and wife Serritha Peterson, Roann; 13 grandchildren; eight great-grandchildren; and two sisters, Carol Flenar, Rochester, and Mary Ann Krause, Spokane, Wash. He was preceded in death by his parents and two brothers, Merrill and Carl "Ted" Peterson. Funeral services will be at 10 a.m. Thursday, June 7, 2012, at King Memorial Home, 101 N. Tucker St., Mentone. Visitation will be from 5-8 p.m. Wednesday, June 6, 2012, at the funeral home. Burial will be at Mentone Cemetery with military graveside rites performed by the LeRoy Shelton American Legion No. 36 and the VFW Post 1343. Memorial contributions can be made to Mentone Fire Department.

The family of Donald K. Peterson created this Life Tributes page to make it easy to share your memories.

Send flowers to the Peterson family.