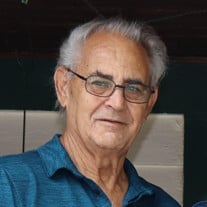 Dennis E. Carlson, 74, of Rochester, Indiana passed at 5:55 am, Sunday, May 1, 2022 at Center for Hospice of Mishawaka, Indiana.   Dennis was born on Sept. 14, 1947 in Rochester, Indiana to the late Francis Truman and Martha Jean (Stretch) Carlson. He married on July 2, 1967 in Gridley, California to Mary Louisa Neves, she survives. He was a 1965 graduate of Rochester High School. He then served his country in the U.S. Air Force from 1966 to 1970. While in the service he was a Crew Chief for the B-52. He was a member of the American Legion Post #36 of Rochester. He worked for numerous implement dealers in the area which included Massey, New Holland, John Deere, International Harvester, and White. He also worked for the Polk family and retired from A&I Products in 2019, where his territory was all of Michigan. Dennis was a fan of racing. He enjoyed NASCAR, the Indy 500, and dirt racing. He loved spending time with his grandkids. Dennis always enjoyed driving, especially with his wife. Every week was a holiday when he and his wife traveled on his sales route. He is survived by his wife Mary Carlson of Rochester; sons Shawn P. Carlson Sr. and wife Paula of Silver Lake; Nelson M. Carlson and wife Tracy of Elwood; Dylan W. Carlson and wife Amanda of Akron; 10 Grandchildren; 8 Great Grandchildren; brothers Kent and Elizabeth Carlson of Rochester, Keith and Chris Carlson of Akron, and Kevin and Debra Carlson. Dennis was preceded in death by his parents and his brother Jerry Carlson and sister-in-law Kathy Carlson. A celebration of his life will be held at 4:00 pm, Saturday, July 2, 2022 at Hartzler Funeral Home 305 West Rochester Street Akron, Indiana with military rite performed. Memorial contributions can be made in his memory to Center for Hospice Care Raclin House 535 Comfort Place Mishawaka, IN 46545.

Dennis E. Carlson, 74, of Rochester, Indiana passed at 5:55 am, Sunday, May 1, 2022 at Center for Hospice of Mishawaka, Indiana.   Dennis was born on Sept. 14, 1947 in Rochester, Indiana to the late Francis Truman and Martha Jean (Stretch) Carlson.... View Obituary & Service Information

The family of Dennis E. Carlson created this Life Tributes page to make it easy to share your memories.

Send flowers to the Carlson family.