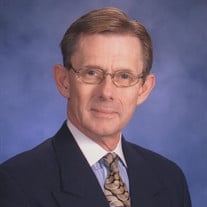 Dr. Charles David Osborn, 79, of Rock Lake, Akron, Ind. and formerly of Kokomo, Ind. passed on Sunday, May 2, 2021 surrounded by his family on the property that he cherished for over 70 years. Charles was born on June 18, 1941 in Kokomo, Indiana to the late Fredius Carmen and Evelyn Francis (Sutton) Osborn. He married on Oct. 6, 1974 in Greenwood, Indiana to Beverly Sue Astell, who survives. Charles was a 1959 graduate of Kokomo High School. He earned his Bachelors, Masters, Specialist, and Doctoral degrees from Ball State University in Muncie, Indiana. He began his teaching career as an English teacher at Fremont High School. Charles then became the Reading Specialist for Kokomo High School. After his Post-Doctoral work, he became the Curriculum Director for the State of Indiana, and eventually assuming the role of School Superintendent for Attica Consolidated Schools, Clay County Schools, Crisp County Schools in Cordele, Georgia, and Gwinn Area Community Schools in Gwinn, Michigan. He retired from his over forty year career back with children as an Administrator for DeKalb County Schools in DeKalb, Georgia. He enjoyed working with children and made a difference in many lives. After retiring, Charles loved to travel, which he had done quite a bit in his youth. He also enjoyed working with flowers and making arrangements for his family and friends. He was a woodworking hobbyist and a craftsman restorer, making many projects beloved by his family. Charles enjoyed playing the organ, which he performed in church and at home, and was fond of classical music. He had a special way of stretching stories and entertaining friends and family of all ages, but most especially his grandchildren. He is survived by his wife Beverly Osborn of Akron, Ind.; children Richard Osborn of Sheridan, Ind.; Stacey and husband Stephen Swanson of Charlotte, North Carolina; Erin and husband Ahmed Chater Jr. of Orefield, Pennsylvania; grandchildren Olivia Swanson, Charles Chater, and Samuel Chater; sister-in-law Joyce Astell of Russiaville, Ind.; niece Ailsa and husband Paul Getts and children Ariana Getts, Bronwyn Getts of Kokomo, Ind.; nephew Joel Thomas and children Seth Thomas, Sabine Thomas, Asa Thomas, and Beatrix Thomas of Wabash, Ind.; special family friends the Dr. Charles Miller Family, and his pride of cats. Charles is preceded by his parents, daughter-in-law Lea Ann Osborn; and brother-in-law Michael Astell. The funeral service will take place at 5 pm, Wednesday, May 5, 2021 at Hartzler Funeral Home, 305 West Rochester Street Akron, Indiana. He will be laid to rest in Sunset Memory Garden Cemetery of Kokomo, Indiana. Visitation hours will be from 3 pm to 5 pm, Wednesday, May 5, 2021 at Hartzler Funeral Home, Akron, Indiana. Donations can be made in Charles’ memory to the donor’s choice of Humane Society or to Kindred Hospice.

Dr. Charles David Osborn, 79, of Rock Lake, Akron, Ind. and formerly of Kokomo, Ind. passed on Sunday, May 2, 2021 surrounded by his family on the property that he cherished for over 70 years. Charles was born on June 18, 1941 in Kokomo, Indiana... View Obituary & Service Information

The family of Dr. Charles David Osborn created this Life Tributes page to make it easy to share your memories.

Send flowers to the Osborn family.