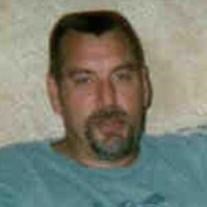 Charles R. "Chuck" Kistler, 52, Athens, followed the angels lead to go home to the Lord at 7:05 a.m. Sunday, Dec. 16, 2012, following a battle with cancer that had began in 2003. He was born July 7, 1960, in Logansport, to parents Howard E. Kistler and Lois (Cook) Kistler. On Oct. 30, 1987, he married Dawn Easterday Kistler, in Rochester. She survives at home. He loved driving semitrailers, and in earlier years, he had worked for Kralis Brothers as a truck driver and most recently he worked for Dean Foods of Rochester as a truck driver for 16 years. Chuck was a member of the Athens United Methodist Church and was a 1978 graduate of Logansport High School. He dearly loved his family. He enjoyed gardening and working in the yard. Chuck loved outdoor activities including camping and boating; he enjoyed the time spent with his family camping at France Park in Logansport. He also loved going to see the ocean numerous times. Survivors include his wife, Dawn Kistler, Athens; three sons, Cody Kistler and Dylan Kistler, both of Athens, and Mitchell Kistler, of Rochester; one daughter, Priscilla Kistler, Logansport; one grandson, Chris Powell, Rochester; his mother, Lois and husband Glenn Coffman, Logansport; mother- and father-in-law, Dolly and Roy Easterday, Rochester; two sisters, Barbara Taylor, Logansport, and Allison and husband Rick Anderson, Valparaiso; two brothers, Mark Kistler, Logansport, and Howie and wife Stacy Kistler, Rochester; and one sister-in-law, Cindy and husband Don Foerg, Rochester. He was preceded in death by his father, Howard E. Kistler, who passed away in 2005. Funeral service is 3 p.m. Wednesday, Dec. 19, 2012, at Athens United Methodist Church. Visitation is 1-3 p.m. Wednesday at the church. In lieu of flowers, donations can be made to the family of Chuck Kistler. Share a memory or send an online condolence at www.hartzlerfuneralservices.com. Hartzler Funeral Home Akron, has been entrusted with the arrangements.

The family of Charles R. "Chuck" Kistler created this Life Tributes page to make it easy to share your memories.

Send flowers to the Kistler family.