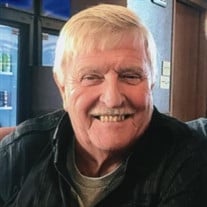 Charles E. Dunnuck, 74, of Bourbon, Indiana passed at 12:15 pm, Monday, Dec. 27, 2021 at Woodlawn Hospital of Rochester, Indiana.  Chuck was born on March 13, 1947 in Warsaw, Indiana to the late Donald and Gladys (Snyder) Dunnuck.  He was a 1965 graduate of Triton High School of Bourbon. Then Chuck went on to follow in his father's footsteps to be a dedicated farmer for over 50 years. Chuck also was the owner and operator of Dunnuck Grain and Livestock. He retired from farming in 2019. He was a lifelong NRA Member as well as the Moose of Rochester and a Diamond Member of the Manitou Lake Association.  He enjoyed camping, boating, his restored International tractors, and car shows with his Shelby Mustang he lovingly named Eleanor. He was a die hard Trump supporter and was always very patriotic. He enjoyed spending time with his lifelong farming friends in Bourbon and also his friends at the Landing in Rochester. He loved spending time with his family and friends and he cherished them deeply.   He is survived by his daughters Kim and husband Wayne Dunnuck Click of Milford, Shari and husband Jerry Dunnuck Kreft of Leesburg, Michelle Dunnuck Nault of Rochester, and Angie and husband Steve Wright of North Carolina; grandchildren Melissa Fletcher, Chase Fletcher, McKenzie Click, Olivia Green, Pierce Green, Eric Dunnuck, Heather Dunnuck-Newsome, Cordell Nault, Ashley Nault, and Andrew Wright; 9 Great Grandchildren; sister Geneal and husband Richard Ecker of Plymouth; and a brother Devon Dunnuck and Marilyn of Akron.  Chuck was preceded in death by parents, sister Deloris Blackford and Evelyn Sechrist, and son Scott Dunnuck.   The Celebration of Chuck’s Life will be held on Sunday, March 13, 2022 from 11:00 am to 3:00 pm at Chuck's Shop near Bourbon, Indiana and another gathering from 3:00 pm to 5:00 pm at The Dam Landing of Rochester, Indiana. Memorial contributions can be made in Chuck’s memory to the Mayo Clinic.

Please check the obituary for updated service times for March 13.

Send flowers to the Dunnuck family.