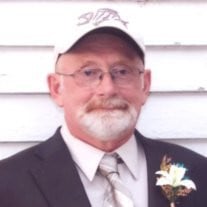 Charles O. Chilton, 62, Rochester, died at 7 a.m. Thursday, Sept. 26, 2013 at the Center for Hospice House of Elkhart. He was born Nov. 18, 1950, in Bremen to Charles D. and Norma (Lechlitner) Chilton. Charles married Brenda Davis Harrell on July 10, 1987 in Argos, and she survives. Charles owned and operated Chilton Excavating Inc. for nearly 30 years. He graduated from Triton High School in 1969. He served his country in the U.S. Army Reserves. He was a member of the Walnut Church of the Brethren and the Cushman Club of America. He enjoyed fishing, riding Harley Davidson Motorcycles, rock crawling - mostly in Hannibal, Mo. - and loved racing and most recently with late model cars. He raced at Plymouth and South Bend. He is survived by his wife, Brenda Chilton, Rochester; a son, Jason and wife Amanda Chilton, Argos,; daughter, Angela and husband Bryan Benn, Rochester; four grandchildren, Christopher and Wade Chilton and Brittan and Ruger Benn; a sister, Dianne and husband Robert Miller, Zionsville; and a brother, Bruce Chilton, Bourbon. Charles is preceded in death by his parents and a brother, Michael Chilton. Services are 10:30 a.m. Monday, Sept. 30, 2013, at King Memorial Home, 101 N. Tucker St., Mentone, with Pastor Bob Rice officiating. Visitation hours are 1-5 p.m. Sunday, Sept. 29, 2013, at the funeral home. Burial is at Walnut Church of the Brethren Cemetery, Argos. Memorial contributions can be made to the Center for Hospice House, 22579 Old U.S. 20, Elkhart. Share a memory or send an online condolence at www.hartzlerfuneralservices.com.

The family of Charles O. Chilton created this Life Tributes page to make it easy to share your memories.

Send flowers to the Chilton family.