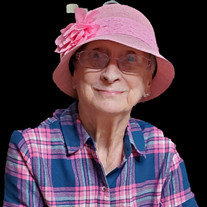 Carol E. Flenar, 86, of Leesburg and formerly of Talma, Indiana passed at 11:38 am, Friday, July 30, 2021 at her daughter’s residence. Carol was born on Dec. 16, 1934 in Warsaw, Indiana to the late Charles "Byron" and Virginia (Woodling) Peterson. On Sept. 25, 1950 in Mentone she married Larry G. Flenar, who preceded her in death on Jan. 4, 1993. Carol was a homemaker and in earlier years she had managed a chicken house for Manwaring Farms and worked at Frank and Jerry’s. She had most recently worked in the cafeteria for Mentone School. Carol had been a member of the Moose, American Legion, Elks, and Eagles. She enjoyed bingo and travelled all over the area to try her luck. She spent her spare time doing jigsaw puzzles and solving sudoku. Surviving Carol are her daughters Pamela and husband James “Japo” Jack, Leesburg and Donna and husband Randy Miller, Talma; sons Larry D. and wife Marilyn Flenar, Federal Heights, Colorado; Rick Flenar, Rossville, Georgia; and Seth Flenar and companion Kelly Ormsby, Bourbon; 14 Grandchildren; and 29 Great Grandchildren. She was preceded in death by her parents, her husband Larry, son Troy L. Flenar, a sister Mary Ann Krause, and brothers twin Merrill, Carl "Ted", and Donald “Pete” Peterson. A memorial service will be held at 11:00 am, Saturday, Aug. 14, 2021 at King Memorial Home 101 North Tucker Street Mentone, Indiana. The interment will take place in the Mentone Cemetery, Mentone, Indiana. Memorial visitation will be from 10 am to 11 am, Saturday, Aug. 14, 2021 at King Memorial Home, Mentone, Indiana. Memorial contributions can be made in Carol’s memory to Kosciusko Home Care and Hospice.

The family of Carol E. Flenar created this Life Tributes page to make it easy to share your memories.

Carol E. Flenar, 86, of Leesburg and formerly of Talma, Indiana...

Send flowers to the Flenar family.