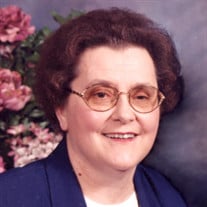 Carol Ann Shewman Aug. 3, 1939 – May 17, 2015 Carol Ann Shewman, 75, of Akron, passed away at 6:25 p.m. Sunday, May 17, 2015, at Miller’s Merry Manor, Warsaw, after being in failing health for seven months. She was born on Aug. 3, 1939, in Akron, to Elmer and Blanche (Miller) Dickey. On Nov. 23, 1958, in Akron, she married Stanley L. Shewman, who preceded her in death on July 25, 2006. Carol worked for Akron Exchange State Bank for 20 years and later for First Bank of Akron. She also worked for Akron Elementary School for six years. Carol Ann graduated from Beaver Dam High School in 1957. She was a member of the Akron Church of the Brethren where she played the piano. She enjoyed playing both the piano and organ and was always a music lover. She was very fond of her cats and enjoyed talking and visiting with all of her friends. Survivors include her sister, Marcella Meredith, Burket, and currently Miller’s Merry Manor; niece Melinda and husband Jim Webb, Claypool; nephew Marlin and wife Londa Meredith, Cicero; and several other nieces and nephews also survive. She was preceded in death by her husband, Stanley L. Shewman, and brother-in-law Vernon “Mumps” Meredith. Her funeral service is 10:30 a.m. Thursday, May 21, 2015, at Hartzler Funeral Home, 305 W. Rochester St., Akron, with Pastor David Hendry officiating. Visitation is 4-8 p.m. Wednesday, May 20, 2015, at Hartzler Funeral Home, Akron. Burial will be in Nichols Cemetery, Akron. In lieu of flowers, memorial contributions can be made to Harbor Light Hospice, 800 Roosevelt Road Building C, Suite 206, Glen Ellyn IL 60137 or the Akron Church of the Brethren.

The family of Carol Ann Shewman created this Life Tributes page to make it easy to share your memories.

Send flowers to the Shewman family.