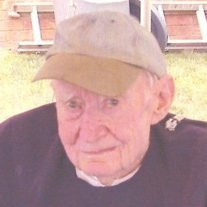 Carey D. Landis, 101, of Miller's Merry Manor, Wabash, and formerly of Mentone, died at 12:55 a.m. Sunday, March 24, 2013, at Miller's Merry Manor, Wabash. He was born Nov. 18, 1911, in Kosciusko County, to John and Sadie (Dirck) Landis. On Aug. 1, 1953, he married Jessie F. Thomas in Winona Lake. She preceded in death on Sept. 30, 1979. He was a 1930 graduate of Talma High School. He was a member of the Packerton United Methodist Church. Carey was a Mentone volunteer fireman for over 25 years, where he was named fireman of the year, as well as Kosciusko County fireman of the year. He was a lifetime member of Indiana Volunteer Fireman Association. He enjoyed fishing and loved sports, especially going to basketball and baseball games. Carey had been a school bus driver for Talma School, and also he was a carpenter and an electrician. He worked at the hardware store in Mentone and farmed in his early years. Survivors include one son, Wayne L. and Beth Landis, Mentone; and two grandsons, Zachary Landis, Mentone, and Jeremiah Landis, Mentone. He was preceded in death by his wife, Jessie Landis; and one sister, Velma Shafer. Funeral service is at 10:30 a.m. Thursday, March 28, 2012, at King Memorial Home, Mentone, with Pastor Bill Wood officiating. Visitation is 3-8 p.m. Wednesday, March 27, 2013, at the funeral home, and at 7 p.m. during visitation hours, a fireman's memorial service will be held. Memorial contributions may be made to the Mentone Fire Department or the Packerton United Methodist Church.

The family of Carey D. Landis created this Life Tributes page to make it easy to share your memories.

Send flowers to the Landis family.