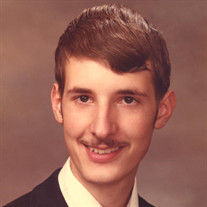 Brett R. Harmon, 47, of Lafayette, Indiana and formerly of Warsaw, Indiana passed at 9:33 am, Monday, March 2, 2015 at his residence. He was born on April 14, 1967 in Warsaw, Indiana to Robert E. and Betty (Paxton) Harmon. Brett was a city bus driver for the City of Lafayette, Indiana for over 8 years. He was a 1985 graduate of Warsaw Community High School. He enjoyed hunting, fishing, farming, and tractors especially John Deere’s. Survivors include his Mother Betty Dotson of Warsaw, Ind., Sister Cheryl Reynolds of Goshen, Ind., and Nephews Joshua Ritter and Alan James Reynolds. He was preceded in death by his Father Robert E. Harmon. The funeral service will be held at 10:30 am, Saturday, March 7, 2015 at King Memorial Home 101 North Tucker Street Mentone, Indiana with Pastor Bruce Barlow officiating. He will be laid to rest at Harrison Center Cemetery, Etna Green, Indiana following the funeral service. Visitation Hours will be from 5 pm to 7 pm, Friday, March 6, 2015 at King Memorial Home Mentone, Indiana. Memorial Contributions can be made to the Kosciusko County Care Fund. Share a Memory or send an Online Condolence at: www.hartzlerfuneralservices.com

The family of Brett R. Harmon created this Life Tributes page to make it easy to share your memories.

Brett R. Harmon, 47, of Lafayette, Indiana and formerly of Warsaw,...

Send flowers to the Harmon family.