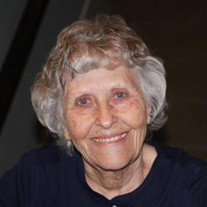 Betty Lou Rohrer, 92, of Argyle, TX and formerly of Akron, Elkhart, and Rock Lake, IN passed away peacefully on May 12, 2021 surrounded by her loving family. Betty was born October 23, 1928 in Akron, Indiana. She was the daughter of Melvin Clark and Mildred Smoker Clark, and she graduated from Akron High School in 1947. She was a member of the Church of God for many years. On February 18,1950 she married Frederick D. Rohrer and they had 3 children together. They lived most of their lives in Indiana, but also lived in Alaska, Florida, and Texas. They especially enjoyed living on Rock Lake in their later years. Betty and Fred had many great adventures throughout their lifetime. They loved to fish, travel in their RV, and spending time with family and friends. One of their most cherished memories was visiting The Holy Land. They attended Christian Center in South Bend Indiana. After 60 wonderful years of marriage, Fred passed away in 2010. Betty was a wonderfully caring wife and mother. One of her greatest gifts was serving others and caring for loved ones. Betty found love later in life with Otto Woike, while living at the Good Samaritan. They were married in 2014 and he passed in 2018. They had a short, but wonderful life together. Betty is survived by her daughters, Nancy Warner of Champaign, IL, Sherrie and her husband Randy Brandt of Argyle, TX., 6 grandchildren, and 8 great grandchildren. Betty is also survived by her two sisters Mary Ann Heiser Stinson and Donna Wahlig, sister-in-law JoAnn Clark, brother-in-law Max Stinson, along with 7 nieces and 3 nephews. Betty was preceded in death by husbands Fred Rohrer and Otto Woike, son Terry Rohrer, brother Bob Clark, and brothers-in-law Fred Heiser and Larry Wahlig. A graveside service will take place at 2:00 pm, Saturday, May 22, 2021 in the Akron Cemetery, Akron, Indiana with Pastor Jim Shrock officiating. The arrangements have been entrusted to Hartzler Funeral Home 305 West Rochester Street Akron, Indiana. Donations can be made in memory of Mrs. Rohrer to the Akron Church of God.

Betty Lou Rohrer, 92, of Argyle, TX and formerly of Akron, Elkhart, and Rock Lake, IN passed away peacefully on May 12, 2021 surrounded by her loving family. Betty was born October 23, 1928 in Akron, Indiana. She was the daughter of Melvin... View Obituary & Service Information

The family of Betty Lou Rohrer created this Life Tributes page to make it easy to share your memories.

Send flowers to the Rohrer family.