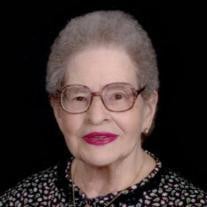 Betty Drusilla Morgan, 85, Akron, passed away at 5:45 a.m. Wednesday, Sept. 26. 2012 at Grace Village Health Care, Winona Lake. She was born Jan. 13, 1927 in Jacksonville, Fla., to parents John and Drusilla (Braddock) Ivey. On May 6, 1945 she married Dr. Lloyd A. Morgan in Jacksonville, Fla. He preceded her in death on April 27, 2003. Betty was a homemaker. She was a member of the Akron United Methodist Church, where she sang in the choir. She also was a former member of the Order of the Eastern Star. She loved reading, crocheting, preparing food, watching movies, and getting together with family, especially the regular family Sunday breakfasts in many area restaurants. Her husband's family was a very special and supportive part of her life. Survivors include four daughters, Michele Braun, Logansport, Adria Martinez, Akron, Allison and husband Gene Strevy, North Manchester, and Denise and husband David Bussard, Akron; two sons, Dr. James and wife Jan Morgan, Akron, and Lloyd A. and wife Kathy Morgan Jr., Akron; 17 grandchildren; 33 great-grandchildren; six great-great-grandchildren; and one sister, Nancy A. Drury, Jacksonville, Fla. She was preceded in death by her parents; step-father, James Carter; husband, Dr. Lloyd Morgan; daughter Drusilla Whittenberger; brother, Raymond Ivey, son-in-law, Tony Braun; and brother-in-law, Samuel Drury. Funeral service is 3 p.m. Sunday Sept. 30, 2012 at Hartzler Funeral Home, Akron, with Rev. Mimi Ault officiating. There is a dinner that will follow and the family invites everyone to join and celebrate her life with them. Visitation is 1-3 p.m. Sunday, Sept. 30, 2012 at the funeral home. Burial will be at Akron Cemetery at a later date. Memorial contributions may be made to Akron Carnegie Library.

The family of Betty Drusilla Morgan created this Life Tributes page to make it easy to share your memories.

Send flowers to the Morgan family.