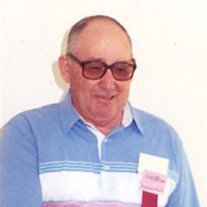 Aug. 24, 1918 - March 1, 2014 Beecher L. Weida, 95, Lake Placid, Fla. and formerly of Akron, passed away at 11:30 a.m. Saturday, March 1, 2014, at Lake Placid Health Care of Lake Placid, Fla. He was born on Aug. 24, 1918 in Burnettsville to Raulete and Ruth (Rodabaugh) Weida. On Sept. 30, 1945, in Monticello, he married Dovie F. Bell. She passed away on Jan. 25, 1993. He then remarried on Oct. 15, 1993, to Norma Jean Stark, who preceded in death on Sept. 15, 2012. Beecher worked at Pike Lumber Company in Akron, for 53 years and retired in 1990. He was a mentor to many young lumbermen. He was a 1938 graduate of Royal Center Regional School. Beecher served his country in the U.S. Army Air Force during World War II as part of the Army 8th Air Force 351st Bomb Group. He had attended the Akron Church of God for many years. He moved to Florida 15 1/2 years ago and was attending the Lake Placid Church of God before becoming unable health wise to attend. He enjoyed camping, mushroom hunting, and work. He also was known to be a dowser, or water finder, as accomplished as anyone. Survivors include a daughter, Jo Ann and husband Wayne Hansen, Wabash; a son, John and wife Crystal Weida, Akron; two stepdaughters, Susan and husband John VanCuren, Mentone, and Glenna and husband Dennis Blue, Warsaw; three stepsons, Thomas Norton, Lake Placid, Fla., Mike and wife Laura Norton, Claypool, and Steven and wife Tamra Norton, Mentone; 21 grandchildren; 39 great-grandchildren and great-great-grandchildren. He was proceeded in death by brothers, Gene and Walter; a sister, Ruth Alice; and a granddaughter, Denise Lewis. Visitation is from 10-11 a.m Saturday, March 15, 2014 at the Akron Church of God. Funeral service is at 11 a.m. Saturday, March 15, 2014, at the Akron Church of God, 301 South West Street, Akron, with Pastor Terry Canfield officiating. Place of remembrance will be the Akron Cemetery. Memorials may be made to the Akron Church of God. Online condolences may be expressed at www.hartzlerfuneralservices.com.

The family of Beecher Weida created this Life Tributes page to make it easy to share your memories.

Send flowers to the Weida family.