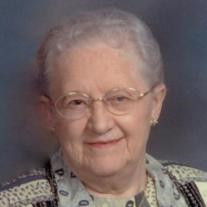 Arleda "Leda" Wilson, 89, Peabody Retirement Community of North Manchester and formerly of Harvard Street, Mentone, died at 4:10 a.m. Friday, June 29, 2012, at Peabody Retirement Community of North Manchester. Leda had been a Mentone resident since the early 50s. She was born Feb. 2, 1923, in Stueben County to Floyd and Edna (Sowles) Hemry. On June 27, 1953, in Pleasant Lake, Stueben County, she married Wymond B. Wilson and he survives. She worked as a receptionist/bookkeeper for 47 years for her husband Dr. Wilson's office in Mentone. Prior to that she had worked for Stueben County REMC and First National Bank in Fremont for 10 years. Leda graduated from Metz High School in 1941. After high school she graduated from Tri State College in 1942 with secretarial training. She was a member of the Mentone United Methodist Church where she served on various committees. She was a Charter Life Member of the Kosciusko Community Hospital Auxiliary and served as Past President of the Kosciusko County Medical Auxiliary. Leda was also an avid IU sports fan. Survivors include her husband, Dr. Wymond B. Wilson, North Manchester; and a sister, Delores Wolff, Edon, Ohio. She was preceded in death by a sister, Esther Ferguson. Funeral service is at 2 p.m. Tuesday, July 3, 2012, at Mentone United Methodist Church with the Rev. Amber Karkosky-Litten officiating. Visitation is from 12-2 p.m. Tuesday July 3, 2012, at the Mentone United Methodist Church. She will be buried at Mentone Cemetery. Services have been entrusted to King Memorial Home, 101 N. Tucker St., Mentone. Memorial contributions may be made to Mentone United Methodist Church.

The family of Arleda "Leda" Wilson created this Life Tributes page to make it easy to share your memories.

Send flowers to the Wilson family.