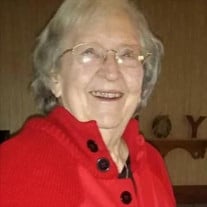 Agnes Ruth (Ooley) Tibbets, 95, of Warsaw, Indiana (formerly of Mentone, Indiana) passed into the arms of her Lord and Savior Jesus Christ on May 3, 2021 in the home she shared with her daughter. She spent her last days visiting with friends and family members, letting them know how excited she was to be going to Heaven. Agnes was born August 13, 1925 in Brazil, Indiana to Loran I. and Ethel (Miller) Ooley. Agnes graduated from Brazil High School in 1943 where she played cello in the orchestra. On July 19, 1945 she married her high school sweetheart, Jim Tibbets, who preceded her in death on December 8, 2020. The couple honeymooned at Turkey Run State Park and then relocated to New Orleans where Jim was stationed with the United States Navy. They were married for 75 years. They lived briefly in Columbus, Indiana before moving to Mentone in 1953. Growing up in Brazil, Agnes began a lifelong desire to serve others when she was asked to lead a group of Campfire Girls during her Junior year in High School. In later years, she “adopted” special needs individuals at the Warsaw Nursing Home, spending time with them and helping make their holidays special. Agnes was an active member of the Mentone United Methodist Church, where she was instrumental in beginning the Bible Study group Alpha, and serving in various ministry capacities over the years. She and Jim sponsored twenty men and women on their Emmaus Walks in association with the Northern Indiana Emmaus Community. She found it very rewarding to see lives changed through the Emmaus experience. She also volunteered in the Hospice program for many years. Agnes spent several years sewing and designing clothes, then worked at Hales and Hunter and Midwest Spring, Mentone, before obtaining her real estate license. She and Jim started Tibbets Realty in Mentone, and then she worked with Lucas Realty, Warsaw. She was a member of the Jolly Janes Club in Mentone. In younger days, she was a den mother for Cub Scouts and loved baking holiday cookies for her children to take to school. She and Jim were also avid square dancers. Agnes is known for her love of all things Longaberger and is remembered by her grandchildren for camping trips, sleepovers, tea parties and New Year’s Eve parties. She loved attending as many of their concerts, plays, recitals, sporting events, birthday parties and graduations as possible. Agnes was happiest when surrounded by her family. Agnes is survived by four children, James David (Jane) Tibbets, Elkhart, Susan Kintzel, Warsaw, Barbara Tibbets, Warsaw, and Daniel (Wendi) Tibbets, San Jose, CA. Also surviving are eleven grandchildren: Joseph (Cathy) Kintzel, Westfield, David (Marisa) Kintzel, Akron, Christy Moering, Winter Springs, FL, Julie (Jim) Riffle, Warsaw, Steven (Julie) Tibbets, Fairfax Station, VA, Jessica (Patrick) Purvis, Warsaw, Sara Mummey, Lafayette, Julia Tibbets, Elkhart, Laura Tibbets, Fort Wayne, Katie (Berto) Gonzalez, Milpitas, CA and Andrew Tibbets, Milpitas, CA. Also surviving are 19 great grandchildren, 3 step-great grandchildren, and one great, great grandchild, her two sisters Joan Wells, Brazil, Indiana and Jackie Thomas, Greencastle, Indiana and many nieces and nephews. She was preceded in death by her husband, parents, a brother Lawrence (Bud) Ooley, a sister Janice Ooley, brothers-in-law Richard Wells and Don E. Thomas, and sister-in-law Roberta (Bertie) Ooley. A graveside service will be held at 2:00 pm, Monday, May 10, 2021 in the Mentone Cemetery, next to her husband, with Pastor Jeff Herron and Pastor Gail Law officiating. The service will be available live via the Hartzler Funeral Services Facebook page at 2:00 pm. The arrangements have been entrusted to King Memorial Home 101 North Tucker Street Mentone, Indiana. Donations can be made in her memory to the Mentone United Methodist Church.

Agnes Ruth (Ooley) Tibbets, 95, of Warsaw, Indiana (formerly of Mentone, Indiana) passed into the arms of her Lord and Savior Jesus Christ on May 3, 2021 in the home she shared with her daughter. She spent her last days visiting with friends... View Obituary & Service Information

The family of Agnes Ruth Tibbets created this Life Tributes page to make it easy to share your memories.

Send flowers to the Tibbets family.